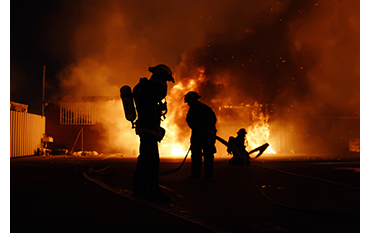 Most people are generally familiar with what Arson means: burning something. Arson also means making something explode. Essentially, it brings to mind some sort of fiery mayhem. The legal definition is more detailed. Legal and criminal aspects of Arson are discussed below in depth, but it isn’t much more complicated than what you probably imagine it to be. Essentially, arson is the burning of any building, habitation, vehicle. Arson is also the burning of any structure, fence, or farming on open land. The crime allegation is outlined in Chapter 28 of the Penal Code. It is grouped with other criminal offenses that deal with property damage, destruction, or criminal mischief. If you are charged with this, it is very important to consult with a criminal defense lawyer and begin to strategize and build your defense. There are many ways to prevail. Depending on the facts of the case, it is possible to reduce the charge, or even beat the charge before indictment.

Is Arson a Misdemeanor or a Felony?

No matter what, if you are charged with arson, you will be looking at defending a felony charge. With good strategy and good lawyering, your case may later get reduced to a misdemeanor, but there is no misdemeanor kind of arson. There are several different degrees of felonies, and different punishments. The penalty will depend on how law enforcement as well as prosecutors allege that the incident occurred, and what was exactly was burned, and how badly it was burned. There is a big range of felony punishments that span from a state jail felony (if someone intentionally starts a fire or explosion somewhere, but a nearby building burning is shown to be unintentional) all the way to a first degree felony (if someone intends to burn down someone’s home or a place or worship). Felonies in Texas must go through an Indictment process. That means that the case goes to a grand jury who decides whether to “True Bill” or “No Bill.” After indictment, the case will end up in one of ten District Courts, which have jurisdiction over felonies. Let’s look at the law from the Penal Code.

What is the Law in Texas on Arson?

For intentional burning under Subsection (a) of 28.02 (of either a habitation, building, or vehicle), there must be a showing that the person started the blaze with intent to damage or destroy. But also there must be some further showing: The person must know one of six things: that the property is within the limits of a city, that it’s insured, that is has a security interest, that it’s the property of someone else, that within the property there is property of another, or that there is recklessness as to whether life will be endangered. An offense under this section is a second degree felony. But if the building is a habitation or a place of assembly or worship, it can be a first degree felony.

Arson while manufacturing methamphetamine is also specifically illegal. This section deals with manufacturing drugs that inadvertently or recklessly ends up with fire. Making some drugs, especially methamphetamine, can often result in these explosions. This is particularly high risk of explosions when people create methamphetamine DIY-style in their homes. The way the statute is written, it could include someone recklessly burning down or exploding their own homes, or their own mobile homes. Of course, as the statute goes on to tell us, catching an arson charge doesn’t mean you cannot also catch another charge. In this case, manufacture of a controlled substance with intent to deliver.

The statute also addresses starting a fire that then causes someone to suffer an injury or die.

A person can be facing multiple counts if more than one of these subsections apply, or some other crime is alleged. For instance, if a person burns down a building and someone dies as a result, that person could be charged with arson as well as involuntary manslaughter or even homicide.

What about Property Damage?

Property damage is going to be an obvious factor determining the outcome in the case. How much property damage will often dictate whether it is prudent for an attorney and a defendant to take a case to trial or not, whether a charge can get reduced to a misdemeanor, or even whether or not a charge can get dismissed outright. If property damage is massive, restitution might be a factor.  Another factor that is crucially important is what the state of mind of the person starting the fire was. This means what was the person’s intent?

What is Intent and How Can Intent Be Shown?

The legal definition is more complex and pointless, but intent is simply what someone means to do. If it is someone's desire to cause a result, and they then do cause that result, that is an intentional mindset. Sometimes it is easy to know what a person’s intent was if a video surfaces of someone dousing a building with gasoline and then lighting a match. Another way intent can be revealed is the statements someone makes, either to police or someone else. Most evidence in criminal trials will generally consist of testimony.

So, if the state can show that you started a fire or caused an explosion, and intended to cause damage to a building or to open land, that charge will be a second degree felony. This could be the case even if the fire burns out after ignition and doesn’t cause much damage. If you intentionally start a fire and a building is damaged or destroyed, but you did not intend the damage, that will be a state jail felony. Because all felonies in Texas must be indicted, it all comes down to how your case is indicted, and what the state can prove beyond a reasonable doubt.