What is the Unlawfully Carry Weapons Law in Texas? 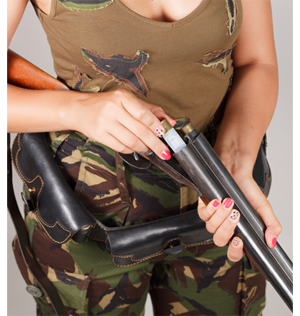 In general, it is against the law in Texas to carry a weapon, although there are several exceptions to this rule. One exception is having a concealed handgun license or a license to open carry. The definition of “weapon” is broad, and includes guns, knives, clubs [1] An illegal knife is defined in Section 46.01(6) of the Texas Penal Code and means:

What is a club? Clubs are tools that are designed or utilized to cause grave physical injury or death by striking another person. It includes these but may also include others:

On January 1, 2016, Texas law changed to allow a person to openly carry a handgun in a shoulder or belt holster. The implications of open carry on unlawful carry are discussed below. Unlawfully Carrying Weapons is a criminal charge in Texas that will be handled as a misdemeanor. The important word in Unlawfully Carrying a Weapon is carrying because it is legal in Texas to possess and use a weapon appropriately. This page discuss this criminal charge is considered in greater detail below, including how open carry laws impact it. However, having and possessing a gun is a powerful right.

How Does the Second Amendment Impact Unlawful Carry?

Most gun owners know that Americans have a Constitutional Right to own and possess a gun. Outlined in the Bill of Rights, the 2nd Amendment to the United States Constitution guarantees this right.[3] Having a gun in your home or in your vehicle is your legal right, both as a United States citizen and as a Texan. And Texas is one of the more gun-friendly states. The Texas Legislature has expanded the right to carry a weapon in Texas to include open carry. If you have questions about an arrest or a charge, it is important to contact a criminal defense attorney. Call me today and I am happy to discuss your options with you.

Are You Facing This Charge?

The Texas Penal Code outlines and defines Unlawfully Carrying Weapons. For the language of the statute, look to Section 46.02 of the Texas Penal Code. Both Texas law and Federal Law allow for a person to legally and lawfully carry a weapon at their own premises, or premises under their control. This basically allows a person to have a weapon at their home or domicile, or other premises if they have control. The law also allows a person to transport and carry a weapon in their vehicle, or walking directly to and from a motor vehicle, unless the gun is in plain view. The bold text states that as of January 1, 2016, it is legal for a person to carry in plain view if they have a license to carry a handgun.

What Do Intentionally, Knowingly, and Recklessly Mean?

The law makes it against the law for someone to intentionally, knowingly, or recklessly carry a weapon. These terms describe the state of mind of the person who is accused of the crime. Most people know what intentionally means—basically that a person meant or intended the result, i.e., purposely carrying the weapon. Knowingly means something similar—that a person is aware of the consequences of the action. Reckless means being aware of but then disregarding a substantial and unjustifiable risk. These mental states mean that if your attorney can show that you were carrying a weapon accidentally, this can be very important, and can be a strong defense to the charge of unlawfully carrying weapons.

What Does Criminal Street Gang Mean?

The law mentions carrying a weapon and being a member of a “criminal street gang.” This is a term that is defined in Chapter 71 of the Texas Penal Code.

Criminal Street Gang means a group of person numbering three or more that all have an identifiable symbol or insignia or a clear leadership structure and this group engages in criminal activity on a regular basis.

If you are facing an allegation of being a member of a criminal street gang, this is an allegation that can be challenged. Contact a criminal defense lawyer. I am happy to discuss this as well as all other elements of your defense.

Which Persons Are Exempt from Unlawfully Carry Law?

Section 46.15 talks about when the unlawful carry laws do not apply.[4] Certain people are exempt from the Unlawfully Carrying Weapons law. Not surprisingly, police officers are exempt from the law. Police officers, of course, are legally allowed to carry firearms and do carry firearms. Other people who are allowed to carry are hunters and fishermen, people in the military, certain security officers, and various others.

How Do CHL Licenses Impact Unlawfully Carrying a Weapon?

The Unlawfully Carrying Weapons charge has a statutory exception for CHL holders. This is detailed in Section 46.15(b)(6) of the Penal Code. This is the case regardless of whether or not the weapon was concealed or out in the open pursuant to the Open Carry law (as long as it is secured in a shoulder or a belt holster. CHL holders do have to follow guidelines, however. These restrictions are listed in Section 46.035 of the Texas Penal Code. For instance, CHL holders cannot openly carry a weapon on the premises of a business that sells alcohol, an amusement park, or places of religious worship. CHL holders also cannot carry while intoxicated.

How Will Criminal Defense of Your Unlawful Carry Charge Go?

If you are facing an Unlawful Carry charge, it is important to speak with a criminal defense attorney about the defense of your charge, how to fight your charge, and how to plan your defense strategy. One thing to challenge is your mental state. Did you really “intentionally, knowingly, or recklessly” carry a weapon? Was the weapon in plain view? There are many points of attack, and there are many ways that your case can go. Your case could get dismissed or reduced. If your case results in a jury trial, the State of Texas must prove all of the elements of this charge beyond a reasonable doubt. This is a high burden, indeed. However, the jury has to understand just how high of a burden it is. It is crucial that your criminal defense attorney teaches the jury what reasonable doubt means during jury selection. The jurors need to understand that probable cause, that police need to arrest someone, is much lower than the beyond a reasonable doubt standard that jurors need to convict someone. Call me to discuss the specific aspects of your case. If you or someone you love has been arrested and is facing this charge, I can answer any questions you may have. I am happy to talk to you about your case and how your case will go forward.