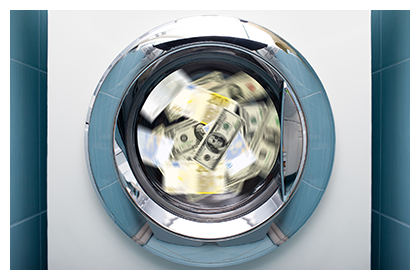 Money Laundering is a criminal allegation that deals with the income, proceeds, or funds that arise or stem from any criminal activity. Money Laundering is a derivative crime, which means that it is a crime that arises from other alleged underlying crimes. These terms are defined and clarified below in detail. This charge begins at a felony charge and increases from there. A money laundering charge also usually comes with the police seizing or taking whatever cash they find on you. The government will then also try to take your money, alleging that you “forfeited” it. The police have come to rely on seizing money from its citizens so they can afford a lot of their high tech gear and gadgets. It is a pretty raw deal, and you will need an attorney to defend you on the criminal charge as well as the forfeiture. There is a federal money laundering crime as well, but this page deals with the Texas law. This page breaks down the Texas money laundering statute and discusses various aspects of both the criminal charge and the possible civil forfeiture as well.

What Does the Texas Law Say on Money Laundering?

What are the Penalties for Money Laundering?

If you are facing this criminal allegation, you will be looking at a felony. This means your case will go through the indictment process and then, if indicted, will funnel to a District Court. In Tarrant County, this means your case will end up in one of ten District Courts. The lowest charge for Money Laundering is a state jail felony and it goes up much higher from there. Also, whatever the “criminal activity” turns out to be, that can likely result in another charge. This charge is often connected with a drug charge. So, a person could very easily be looking at facing Money Laundering charges as well as Possession of a Controlled Substance or Possession with Intent to Distribute a Controlled Substance. The penalties from the money laundering statute increase based on amount. For the actual penalties, click the link above to the text of the statute.

The penalties are staggered based on the alleged amount and begin at the felony level. What do these penalties mean? A state jail felony has a range of between 180 days and 2 years in state jail. A third degree felony carries between 2 and 10 years in the Texas Dep’t of Corrections. A second degree carries between 2 and 20 years in TDC. And a first degree felony has a ranges in punishment between 5 and 99 years. All of these felonies carry a maximum fine of $10,000.

There is a requirement that a person’s conduct not only fall into one of the provisions of the statute, but do so knowingly. What does knowingly mean? The statute hits on what knowledge of money laundering means:

Knowledge of the specific circumstances of the criminality that leads to the proceeds is not required to satisfy the mental state requirement for money laundering.

If a police officer or a confidential informant informs someone that the proceeds are the result of some criminal activity, then the knowingly requirement is satisfied. It does not matter if the police officer is working undercover or not.

What is "Criminal Activity"?

Criminal Activity can mean a felony under federal law, the laws of Texas, or the laws of any other state:

“Criminal Activity” means a crime or an attempt to commit a crime that is a felony in Texas or in any other state, or that could result in at least a year in jail.

The reason for the one-year requirement is that the laws of different states will vary and misdemeanors and felonies don’t always translate cleanly. The cutoff for a felony in Texas is one year. Anything that carries a range of punishment that could drag on longer than a year is a state jail felony. Interestingly, criminal activity also covers preparatory offenses such as criminal attempt and criminal conspiracy. It does not have to be a completed criminal offense to qualify as criminal activity.

What about Civil Forfeiture?

If you are accused of money laundering and the State of Texas seizes an amount of cash from you, they can then try and allege that that money should be forfeited because that money was obtained by illegal means. This often adds insult to injury if you are facing a money laundering criminal allegation; or rather, adds injury to injury. Unfortunately, the State only has to show that the property is subject to forfeiture by a preponderance of the evidence. This is a significantly lower burden than beyond a reasonable doubt, which is the standard of proof which the State has in criminal cases. Much of the time, forfeiture will be an issue in drug cases. Factors that courts may consider in determining forfeiture suits are