Self Defense is a legal defense that justifies conduct that would otherwise be a crime. That underlying crime might be assault or it might be murder. Unlike some other defenses that deny or refute the underlying offense such as when a person denies an offense happened, a claim of self-defense is an affirmative defense. An affirmative defense admits the underlying crime and attempts to justify it legally. A claim of self-defense is both an admission of the crime, and a claim that there was no other choice but to use force, or deadly force—either to prevent a greater crime, or for the person to protect themselves against bodily injury or serious bodily injury or death. Texas is one of several states that have broad self-defense laws, including a Stand Your Ground Law that has been so controversial in years past. Also, in Texas, like several other states, there is no Duty to Retreat. As long as you are not trespassing, and you have lawful right to be where you are, you do not have any obligation to retreat before engaging in self-defense to protect yourself and to protect your family. This page discusses these and other aspects of self-defense in detail. Texas allows its citizens to protect themselves, others, and property both by using force and using deadly force. 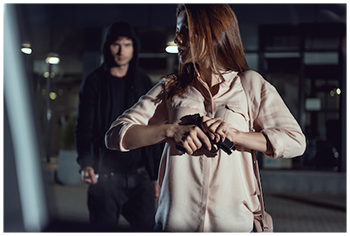 The right to self-defense is broad and strong, and it allows a person to employ force or deadly force for protection in a variety of different circumstances. These laws are in place both for protection and prevention—for you to protect yourself and to protect others, and to prevent imminent violent felonies, and in limited circumstances to protect property. However, self-defense is not a license to inflict bodily injury or to kill someone any time you feel like you are being threatened, and any time you are afraid. To lawfully defend yourself, it must be reasonable to use force, and the danger must also be imminent and real. These rights are codified in the Texas Penal Code Section 9.31, 9.32, 9.33, and 9.41, which this article will discuss in detail.

When Raising Self-Defense, Reasonableness Is Everything

The touchstone for using deadly force is necessity and reasonableness. Force and deadly force must be reasonable under the circumstances. If the case goes all the way to trial, jurors must believe that whatever degree of force used corresponds to the threat and danger of the situation, as seen from the point of view of the person facing the danger. This is one of the most important facets of self-defense—that reasonableness is not determined in an objective way—reasonableness is determined from the perspective of the person who used force or deadly force. That means what that person felt, what they thought, based on reality as they knew it to be, are crucially important factors that need to be presented powerfully to the jury. Closely tied to reasonableness is the concept of immediately necessary. Situations arise in which a jury may believe that deadly force is reasonable, but it doesn’t believe that it’s immediately necessary, and this could defeat a self-defense claim. Even if protecting yourself is reasonable, you can’t leave the scene and go sleep on it and then come back and use deadly force.

If Your Home or Vehicle Is Entered Unlawfully, Reasonableness Is Presumed

Texas gives very strong rights to a person to protect their property. This is especially true of the home. Under Texas law, there is the Castle Doctrine—the home is sacred. However, the law allows you to use force to protect you in your vehicle. If the person using force knew that the other person unlawfully entered or attempted to enter their home, car or business, it will be presumed that the person’s belief that using force was immediately necessary was reasonable. If these facts can be shown, the jury is instructed that there is a presumption of reasonableness. And the prosecutors must prove beyond a reasonable doubt that it was not reasonable. This is very important. It is a huge protection under the law for people claiming self-defense.

What Is the Difference Between Force And Deadly Force?

There are two kinds of force described in the Texas Penal Code, force and deadly force. Force varies in intensity and doesn’t mean one thing. This is because there are different degrees of force that can be used in response to any situation. Force has different degrees. It can be a light shove on the shoulder, or it could be a savage beating that leaves someone bruised and bloodied, and it could fall anywhere in between. Force is not defined by the Texas Penal Code, although deadly force is. Deadly force means that the force is meant to result in someone’s death or in serious bodily injury, based on the way the force is used or in the way the force is intended to be used. Generally, a claim of justifiable deadly force will arise in a murder trial or an aggravated assault trial. There are many ways to murder someone, of course. Many times, a claim of deadly force will be raised in a trial involving a gun death in a murder trial.

As noted above, the use of force is justified if the person using force believes that it is immediately necessary to defend themselves against someone else’s unlawful force. Self-defense that justifies the use of force—but not deadly force—comes up usually in assault or aggravated assault cases, in which there are some injuries, possibly serious ones even though the person survived. The important factor here is that it must match the force used. So even if a person unlawfully uses force against you, you cannot use more force than is necessary to defend yourself. Force must be used to the degree necessary to defend yourself.

To begin, it is important to note that if force is not justified, deadly force is out as well. For deadly force to be justified, force must first be justified. If force is justified, then it must also be tailored to the situation. It must be timely and it must be only to the necessary degree to either protect yourself against unlawful deadly force or attempted use of deadly force, or to prevent the imminent commission of a serious felony. The serious felonies listed in Section 9.32 are murder, aggravated robbery, kidnapping, aggravated kidnapping, sexual assault, or aggravated sexual assault. Imminent is a key indicator that timeliness is very important to a self-defense claim. The commission of the felony must be about to occur.

When Is Using Force or Deadly Force Immediately Necessary?

Deadly Force to Protect Yourself 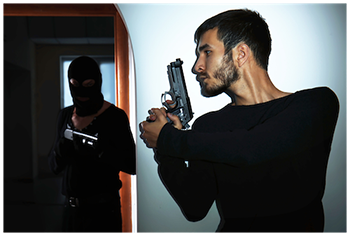 Self-defense isn’t only about protecting people. In certain circumstances, there is also a legal justification for defending property. You can also use force to protect property. You can even use deadly force to protect property. A person can use force or deadly force to protect land, and also to protect other kinds of personal property. The statutes about defending property are located in the Texas Penal Code in Sections9.41 and 9.42. You can use force to the degree reasonably necessary to stop a trespass on your land, or to stop or prevent an unlawful interference with some other property. If you have been removed or dispossessed from land or other property, you can also use force to recover property or reenter land to the degree necessary. Once again, there are time limits—like all claims of self-defense, it must be immediately necessary. Deadly force can be deployed to prevent the imminent commission of arson, robbery, aggravated robbery, burglary, or theft during the nighttime. Deadly force can also be used to protect property to prevent a person from fleeing with the property immediately after committing those same felonies. However, you must reasonably believe that there is no other way to recover the property, and that using force less than deadly force would make you vulnerable to a serious risk of either serious bodily injury or death.

When Is Deadly Force Not Allowed?

Is Self Defense Allowed in Response to Words?

No, self defense is not allowable as a defense as a response to words and words alone. There must be something else in addition to verbal provocation. There must be either a show of force or a show or deadly force. The justified use of force as a defense to assault or to aggravated assault or to homicide is a reaction to a someone else’s unlawful force, or someone else’s unlawful deadly force. How much force the law will tolerate as a justification depends on how much force the other person uses or attempts to use. Words alone, verbal provocation, including present or future threats are specifically excluded from the self defense statute. Determining what verbal provocation, by itself, means in the real world will often be messy. The defense and the prosecution can argue heatedly over this. For instance, what if someone were to say “I will kill you?” This is not enough to raise self-defense. But, what if while these words, he is aggressively walking toward you? What if he is reaching into a bag or a jacket pocket and you think that he has a weapon? Those situations are more than verbal provocation alone. The possible fact scenarios are countless, and each one requires its own detailed legal analysis.

Does a Person Have the Duty to Retreat?

Does Texas Have Stand Your Ground Laws?

How Does Carrying a Handgun Impact a Self Defense Claim? Texas Penal Code 46.02