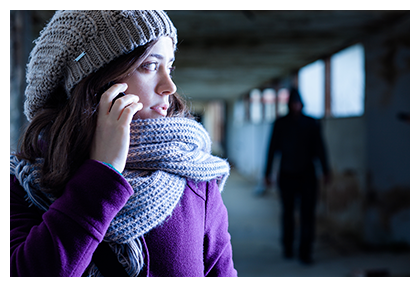 Stalking means repeatedly threatening bodily injury or death toward a person, that person’s family member, or that person’s property. Stalking must be within the same scheme or course of conduct. Stalking is a felony. Sometimes the charge is warranted. However, it is also one of the most confusing and poorly-written statutes in the Texas Penal Code. Stalking charges can arise in situations in which the police really shouldn’t be involved—situations in which both parties are at fault, and the only difference between the “victim” and the person who eventually becomes the “defendant” comes down to who called the police and who did not. I have seen this first-hand in my practice. This page breaks down and discusses the statute on Stalking, Section 42.072 of the Texas Penal Code.

Stalking can be either two Harassment offenses or two threats. The Harassment offenses or threats can be directed to either a person, a person’s family, or a person’s property. Harassment, a Class B misdemeanor, is discussed in more detail below. There is a requirement that they must be part of the same scheme or course of conduct. The language from the statute on Stalking is located in Texas Penal Code 42.072:

The statute is very confusing and complicated. And it can be even more confusing and complicated when applied to actual real-world events. Although, the bottom line is that the person receiving the threat or receiving the unwanted conduct must believe the conduct is threatening, at the very least, bodily injury. Under 42.072(a)(1), when you are dealing with two or more acts of Harassment, it is subjectively up to the person receiving the threat whether the threat exists. This can be a real problem when it comes to enforcement, and can lead to weak cases getting prosecuted. When we are dealing with a person’s perception of events, criminal charges can be driven by subjective emotion and overreaction and spite and resentment. as opposed to objective punishment of bad acts.

What is a Harassment?

Harassment is a very closely related crime that is a Class B. Harassment is a lesser-included offense of Stalking. As mentioned above, two offenses of Harassment directed toward the same person, person’s family, or person’s property, can amount to Stalking. These two offenses do not need to be proven beyond a reasonable doubt for someone to be indicted for felony Stalking. Harassment is found in Chapter 42, Section 42.07. For language from the statute, click here.

It is clear how easily a person might be charged with Harassment, and potentially charged with Harassment a second time, and then could be facing a Stalking charge. All it might take to get indicted for Stalking is sending someone repeated text messages or repeatedly calling them, regardless of whether or not they are repeatedly calling you, repeatedly sending you similar text messages as well.  The major problem with this statue is that it is not written specifically enough to prevent a person from catching a felony charge who doesn’t deserve it.

What is the Same Scheme and Course of Conduct?

What Level Charge is Stalking?

Stalking can be either a third-degree felony or a second-degree felony, depending on how it is charged, and the facts and circumstances of the case. The range of punishment on a third-degree felony carries possible prison time. There is a potential range of punishment of between 2 years in prison and 10 years in prison. The fine on this level of felony can be maxed at $10,000. Stalking can also be charged as a second-degree felony if a person has a prior conviction for Stalking. During plea negotiations, these charges can be bargained down to misdemeanors. These charges can be both dismissed or won at trial. Probation can be available as well. If you or a loved one is facing a Stalking charge, call me to discuss your defense.

[i] Ponier v. State, 326 S.W. 3d 373 (Tex. App.—Houston [14th Dist.] 2010) In this case, the court affirmed the conviction on the evidence that the appellant repeatedly harassed and threatened the defendant on several occasions during a course of time between 1993 and 2007. Behavior included driving by defendant’s home, sitting in a parked car outside defendant’s home, making threatening phone calls to her at home and at work, and threatening to kick in her door.